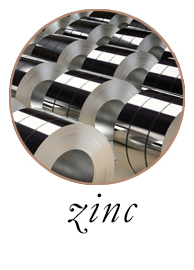 The date when zinc production began is hotly debated. Some say that it was isolated by the Greeks before the Common Era, while others say that it was produced for the first time in the fifteenth century by the Chinese. However, industrial production in Europe began in the 17th century – mainly in England. The first Europeans to produce copper and zinc alloys were the Romans, who had discovered that it was possible to obtain an alloy similar in colour to gold (called orichalcum) by mixing copper and zinc minerals.

Pure zinc is used in hot dip galvanising of iron, for electroplating, or for spraying sheet metal for roofing or for coffins. It is also used for electric batteries and is the basis for industrial alloys and some salts used in dyeing, paints, medicines, etc.