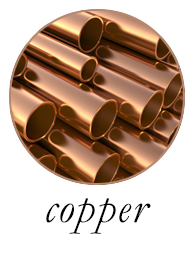 Our modern plants can treat and compact non-ferrous metals, which are then stored and prepared for transport to the metallurgical industry.

The main metals that we recover and sell are aluminium, nickel silver, bronze, nickel, brass, copper and zinc.

Copper is one of the metals that was isolated as far back as ancient times and its discovery dates back over 6000 years. The presence of copper objects in multiple Egyptian tombs shows that it was already well-known to the earliest Ancient Egyptian dynasties (Thinis period), having probably been extracted from the mines of Sinai. Copper’s malleability and high resistance to corrosion meant it was suited to various uses, except when high mechanical strength was required, such as in weapons, where bronze was used. Bronze was one of the first copper-tin alloys and was probably discovered accidentally when processing copper minerals containing tin.

Copper metallurgy and usage originated and developed in the Mediterranean area, and several terms related to this mineral take their names from places. Chalkis (Chalcis – the capital of the Greek island Evia) is the source of the Greek term “chalcos” which was used for both copper and bronze and is still used generically for copper alloys (e.g. chalcopyrite) The Latin term Cuprum for copper derives from Cyprus, leading also to the modern names copper, cuivre (French), kupfer (German), cobre (Spanish), etc. The Italian word for copper (rame), however, derives from the Latin “aeramen”, while the word “bronze”, meanwhile, derives from the city of Brundisium (Brindisi, in Italy), known for the production of bronze mirrors. The other alloys – brass (copper and zinc) and nickel silver (copper, zinc and nickel) – are more recent and originate from the Middle East and China, respectively.

Today, copper is used both in its pure state and as a base metal for several alloys such as bronze, brass, nickel silver and other copper alloys (copper and aluminium, copper and nickel, copper and beryllium, etc.). It is also used in alloys of nickel (Monel), aluminium alloys (duralumin), in steels and cast irons, with zinc and in white metals.

Copper can be extracted from its ores (a combined total of 165 copper ores classified as sulphides and oxides) using two methods:

(a) the dry method, using a melting process with a shaft furnace or reverberatory furnace
(b) by wet method, by leaching through attachment solutions.