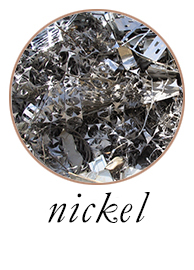 The discovery of nickel dates back to the 18th century, although its alloys were already known in the Eastern countries several centuries before the Christian era. Nickel was isolated in 1751, but it only became used in industry in the second half of the 1800s, when it became possible to obtain significant quantities of the pure metal. Today it is one of the most common metals used in modern industry.

In its pure state it is mainly used in nickel plating, in the chemical industry (also as salts and catalysts), but its main use is as an alloying component in steels, cast irons and other alloys. It forms the basis of large groups of alloys including:

These in turn give rise to other types of alloys (special alloys) such as: Monel (68% Ni, 28% Cu, 4% others such as Fe and Mn); Monel 500, with the addition of aluminium and titanium, which has such high-performance characteristics that it can be widely used in equipment for the chemicals industry; Inconel (80% Ni, 14% Cr, 6% Fe), Niminic, Udimet, Hastelloy, Corronel 220, etc. – all alloys designed to mechanically withstand high temperatures and therefore used in foundries.