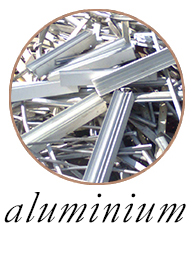 Aluminium is one of the most modern metals because it was only discovered in a laboratory in the early 1800s. The first industrial process dates back to 1854 and a Frenchman who managed to produce sufficiently pure aluminium. Towards the end of the 1800s, a Frenchman and an American patented the system for electrolytically producing aluminium from alumina (aluminium oxide) obtained from minerals through a wet process and then dissolved in a molten salt. This process spread rapidly, quickly replaced the previous chemical process, and is still the only industrial method for the production of aluminium. Aluminium is very common in nature and ranks third among the main constituents of the earth’s crust with 8.13%.

The most important mineral for the extraction of alumina is an impure hydroxide called bauxite (name derived from the French town of Provence Le Baux, where it was discovered in the early 1800s). Bauxite is found on all continents except, it seems, the Antarctic.

Aluminium is used in its pure state because it conducts heat and electricity better, has greater corrosion resistance and is malleable, while alloys are used if there are significant mechanical stresses.

Transport: we can find aluminium both in coatings and in vehicle interiors using Al-Cu-Mg alloys (duralumin, Avional) and Al-Zn-Mg-Cu (Ergal) alloys with high mechanical resistance; in railways and in ships we use Al-Si-Mg (Anticorodal) and Al-Mg (Perluman) alloys with greater resistance to corrosion; in the motoring sector we use Al-Si and Al-Si-Cu alloys.
Construction: Windows and doors are almost entirely made of Al-Si-Mg alloys, while for panels and architectural solutions pure aluminium or Al-Mg alloys are used.
Packaging: pure aluminium is used for thin sheets and small to medium containers, Al-Si-Mg or Al-Mg alloys are used for large containers (drums, cylinders, etc.).
Domestic uses: aluminium is used to manufacture cookware.
Electrical engineering: for the construction of high-voltage power lines.

Aluminium is used in many applications including screws, nails, perforated metal sheets, sports equipment, coins and many other everyday objects. It is undoubtedly the most widely used metal in everyday life and, like all other metals, lends itself easily to reuse via recasting. As such, it is so important to be able to recycle these metals, as this can result in economic savings and have substantial ecological benefits. That is precisely why International Coms operates in the raw material recovery sector.

The metals and their alloys described above are just some of the ones that we sell, while we also deal in silicon and steel, among others.